Well, this is all subject to different opinion, but I'm going to put a very big vote in for Ikea's Ritva panels!

They aren't actually linen. Ikea does have linen curtains as well, and on my trip there with curtains on my shopping list I half expected to love the real linen so much I'd make a splurge purchase on those. They are after all twice as much.

Nope, I loved the Ritva. They have beautiful texture, are slightly thicker, and don't have the crunched up, crinkly linen look.

Before I settled on these I did way, way too much research trying to decide how to get the curtains I wanted for the best price possible. I had three tall windows in our bedroom, wanted two wide panels per window, and wanted them to be thick-textured and have some weight. Yes I can sew, and considering I made my own curtain rods AND curtain rings one would think I would make the curtains too! But that would come out to about 18 yds of fabric, fabric isn't always very cheap, and it would take a whole lot of work.

The really cheapy DIY options I came across didn't thrill me either. Cotton sheets are inexpensive, but not what I wanted at all as far as look or feel. And drop cloth is also inexpensive and is heavier, but for so much fabric it would still add up, plus they're too dark. I'd have the added step of bleaching them whiter with uncertain results. I've had dismal outcomes with trying that before.

Ironically, many of the Ritva reviews I came across were from designers who touted these curtain panels as a very, very inexpensive way to get a very expensive look. Never mind they were a bit of a splurge for me. Ha. But well worth it none the less.

For 25 dollars you get two beautiful, heavy, 98" curtain panels. I would describe the fabric as a cross between canvas and linen, it has beautiful texture but is heavier and sturdier than plain linen. Though I do like making things for myself, I'm fairly certain I could not have made the equal of these curtains for less than I paid, not to mention the time I saved by just buying them. Sometimes it's worth just paying the money. 🙂

Since they're so simple, they're also very easy to customize! For mine, I wanted to add just a bit of interest but not take away from the soft, white, simplistic look of the curtains. So, I added lace to just the inside edges of the curtain. (Actually, I cut the lace panel I had used as my aisle runner in my wedding (awwww) into the scalloped trim.) You could get very much the same look by cutting lace table runners in half and sewing them on.

If you want to add lace panels to some curtains you have, this next part is for you. If not, you can skip to the end where I have a few other ideas for customizing your Ritvas.

If you have lace that has nicely bound edges you have a pretty simple task. Just line up the lace on the back of the hem and sew away.

If you have more of a fabric lace with raw edges like I did, I have a few tricks for you.

Your first step would be to cut the lace the same length as your curtain panels, plus about 1 inch.

Now, since I can't for the life of me find the photos I took of sewing the actual lace to the curtain, I re-enacted the process. Let's pretend the white fabric is the curtain and the black lace is what we want to edge it with. (Blue thread used only for your easy seeing, I promise I usually use matching thread. 🙂 )

Since this lace has raw edges, we want to hem the ends. My all time favorite way to do this is with ban-roll. Someday maybe I'll expound on this, until then I'll just share a few photos and a link that explains it well. It's genius. Perfect tiny hem every time, with no pins and minimal ironing needed. And actually, I've done it so much I'm kind of naughty...I don't even iron at all until I'm done.

Okay, so now we have the edges on the ends nicely hemmed (again, I promise I usually use matching thread).

Now let's go on to sewing the lace to the curtains. Ideally we want to hide the raw edge and leave the hem looking nice and neat, but we don't want to iron much. Because ironing is bad. What shall we do?

So, what you want to do now is sew right on top of the seam that's already in the hem, but only about 1/4 inch from the edge of the lace. See above picture. You'll see why in a minute.

With the wrong side of the curtain still facing you, flip the lace the other way. Ideally you would pull it taut against the seam and iron this now. (Have I mentioned I don't like ironing?)

Sew another seam close to the edge of the curtain, encasing the raw edge of the lace between the two seams.

And, if I had used white thread, the hem would be very neat looking indeed. No raw edges showing anywhere!

There are so many other ways to easily add your own touch to your curtains.

Dwellings by Devore added greek key trim to her curtains. Isn't it lovely?!

And of course there are countless other ways to make simple curtain panels pop. So go get yourself some Ritvas and do your own magic. 🙂 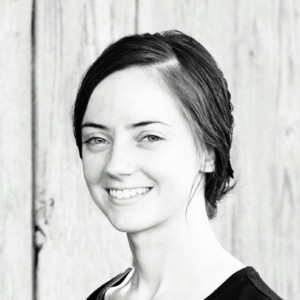 Mostly I drink coffee, dream up beautiful things to make, and think deep and somewhat useless thoughts about why the world is the way it is... Read More

Stay up to date

Stay up to date with all the latest